Nostalgic vintage signs are part of what give Balboa Island and the Balboa Peninsula so much character. Everywhere you look, you can find antique styles from the 1940’s and 1950’s. And with the explosion of construction going on at Fashion Island and Mariner’s Mile, it’s comforting to know that some things in Newport Beach have not changed.

With one look at the Dad’s Original Frozen Banana sign and the historic Auto Ferry billboard, you truly get the feeling you are transported back in time. The neon “Cocktails” and “Dining” markers at The Village Inn invite you to just come on in. And Hershey’s Market and the U.S. Post Office evoke the feeling of an old West town. The feel of Balboa Island is quaint but current, and that’s why tourists and locals love it so.

Take the ferry to the Balboa Fun Zone, and you are greeted by the recently restored U-Drive neon sign, which was originally built in 1933. The renovation is part of a plan to revitalize the Balboa Village area, which is slated for Coastal Commission and City Council approval in November 2014.

The Bay Arcade, Balboa Pharmacy and the Balboa Performing Arts Theater are just a few of the interesting, iconic signs you will find on the peninsula. And don’t forget Ruby’s at the end of the Balboa Pier. Take your own walking tour of all the cool and classic signs – makes for a fantastic photo book. 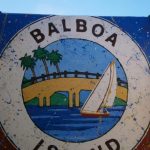