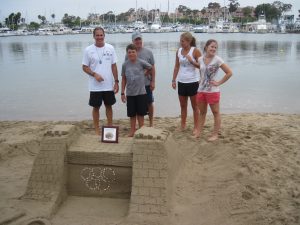 Kids of all ages gathered together on Saturday, August 4, to compete in the annual Balboa Island sandcastle building contest on Ruby street beach. The contest was presented by the Balboa Island Improvement Association and Sue and Scott Sibley who have sponsored the event for the past four years.

Over 60 participants were judged on originality, workmanship, team participation and best overall design. The annual contest is open to any kids who live on the island and Newport Beach. The turnout has been great. Its nice to see the community come out to support this event, Scott Sibley said.

Each team consisting of no more than six participants (and primarily made up of kids) was given one hour to create their works of art. To make the event more challenging, participants were only allowed to use natural elements found at the beach.  As recognizable shapes began to form, teams rushed to finish before the one hour time limit was called over the loudspeaker. Meanwhile, music and laughter served as the backdrop as eager onlookers watched the frenzied sand artists.

Once the official time was called, judges and event officials deliberated for 30 minutes before they announced the winning teams. Congratulations go to: 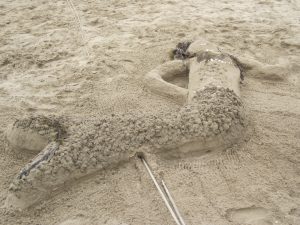 Every participant received a commemorative dog tag and the opportunity of participate in a great community event. The winners received a beautiful plaque, dog tag and bragging rights for one year.