Relaxed and charming, Balboa Island in Orange County, California has a history rooted in land speculation, transportation and dance halls. In 1899, W.S. Collins, who had made his fortune in Southern California land speculation and transportation, was convinced to purchase 1000 acres of the land around the Newport Bay for development. At that time, Orange County was mostly orange groves and there were no rail lines leading into the area and H.E. Huntington wasn’t interested in building any. Collins bought that land for $50,000, dredged the harbor to create the man-made Balboa Island, connected it to Los Angeles via the Pacific Electric Railroad and within 15 years, property on Balboa Island was worth $5,000,000.

In 1905, the Balboa Pavilion was built and became the focal point of the Balboa Peninsula. It was originally built as a Victorian bath house and terminal for the Pacific Electric Red Car line, but soon was converted into a dance hall and became a destination throughout the southland for dancing and revelry. It was joined in the 20’s by the Rendezvous Ballroom, Southern California’s premier dance hall. All the “big bands” – Stan Kenton, Benny Goodman, Nat King Cole, Dorsey Brothers, Harry James, Glenn Miller – played at the Rendezvous throughout the 30’s and 40’s.

The Balboa Pier was built in 1906 as a companion to the Balboa Pavilion. Land speculators wanted to attract lot buyers to undeveloped land on Balboa Island and the Balboa Peninsula, and when the Pacific Electric Railway opened up service to the Island, the pier and Pavilion were built as destinations for visitors. The plan worked and people came from all around Southern California to enjoy the beaches and many purchased lots and built vacation homes.

The pier has become a popular place to fish, and the Harbor is known to be a good spot to catch flounder and mackerel. Also, starfish grow on the pier, feeding on mussels attached to the pilings and can often been seen when the tide is out. 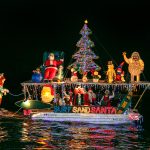 In 1913, the “Illuminated Boat Parade” was started and eventually morphed into the “Christmas Boat Parade”, which continues to this day. Hundreds of crafts bedecked with lights and ornaments participate in the annual Newport Harbor Christmas Boat Parade through the Harbor to the delight of thousands of viewers, culminating in a fireworks display over the Balboa Pavilion.

In 1916, Balboa Island was incorporated into the City of Newport Beach, giving the island access to city services.

In 1919, Joe Beek, still a college student at the time, saw the possibilities for Balboa Island. He was granted permission to begin a ferry service between the Balboa Peninsula and the Island. Starting with one ferry – basically a large rowboat with a small motor – Joe began offering crossings for a nickel per person. He didn’t have a regular ferry schedule; instead folks who needed to cross the harbor made an appointment over the telephone. Today, the Beeks family still runs the Balboa Island Ferry. They now have multiple ferries, in continuous service, that carry up to 3 cars, as well as passengers. 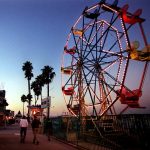 In 1936, the Balboa Fun Zone was created on the boardwalk and the ferris wheel, with its views of the Newport Harbor, has become one of the premier landmarks of Balboa Island. In 1986, the Fun Zone was completely re-vamped and today, the carousel, bumper cars, delicious food and great shopping make it a favored destination.

In the 1950s, as local legend has it, the famous Balboa Bar was first created and served on Balboa Island. The Balboa Bar, a delicious vanilla ice cream square covered in chocolate, and sometimes nuts or sprinkles, is enjoyed by thousands of locals and tourists to this day.

These days, Balboa Island is known as a charming destination for locals and visitors alike. Strolling the waterfront boardwalk, enjoying the games and rides at the Balboa Pavilion, relaxing on sun-filled beaches or fishing from the Balboa Pier, there is plenty to do and enjoy on Balboa Island.