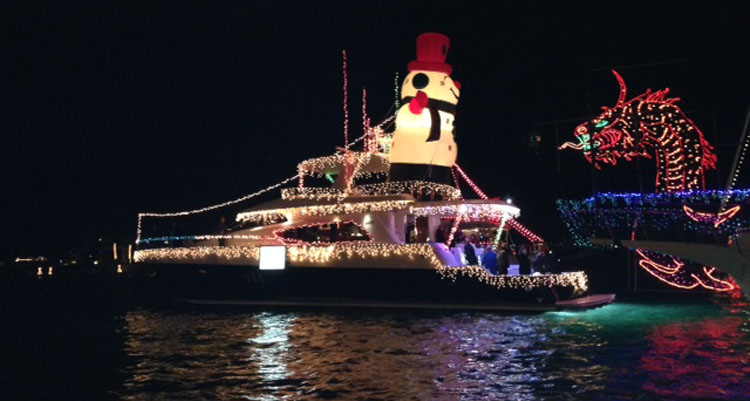 The 2013 Newport Beach Christmas Boat Parade began with a bang tonight as fireworks lit up the sky over the Balboa Pier. Then approximately 100 illuminated vessels, from multi-million dollar yachts to small Duffy boats, began their annual procession through Newport Harbor.

Known as Newport Beach’s Christmas Card to the world, the boat parade began in 1907 with gondolas and canoes decorated with Japanese lanterns. Today, the boat parade is seen by almost a million people every year, from homes, restaurants, boats and public beaches in Newport, Corona del Mar and Balboa Island. It’s a magical tradition that locals and tourists take part in each year.

The parade runs Wednesday, December 18th through Sunday, December 22nd from 6:30 p.m. to 9:00 p.m. It takes off at Bay Island and cruises through the harbor, finishing back at the starting point. Hosted by the Newport Beach Chamber of Commerces Commodores Club, this year’s theme is Rockin Around the Christmas Tree!

Participants always go all out with their decorations! From icicle lights to T-Rex, the trimmings were creative this year. According to the Chambers website, some boat owners have spent over $50,000 to decorate their boats with amazing lights, music, and animated figures. They compete for awards including Most Humorous, Best Theme Presentation and Best Music.

Balboa Island is a perfect spot to watch the boat parade! Whether you walk the boardwalk or attend a boat parade party, the harbor sights are just steps away. Victorian-style carolers and musicians stroll about entertaining the crowds, and the homes are beautifully lit for the holidays.